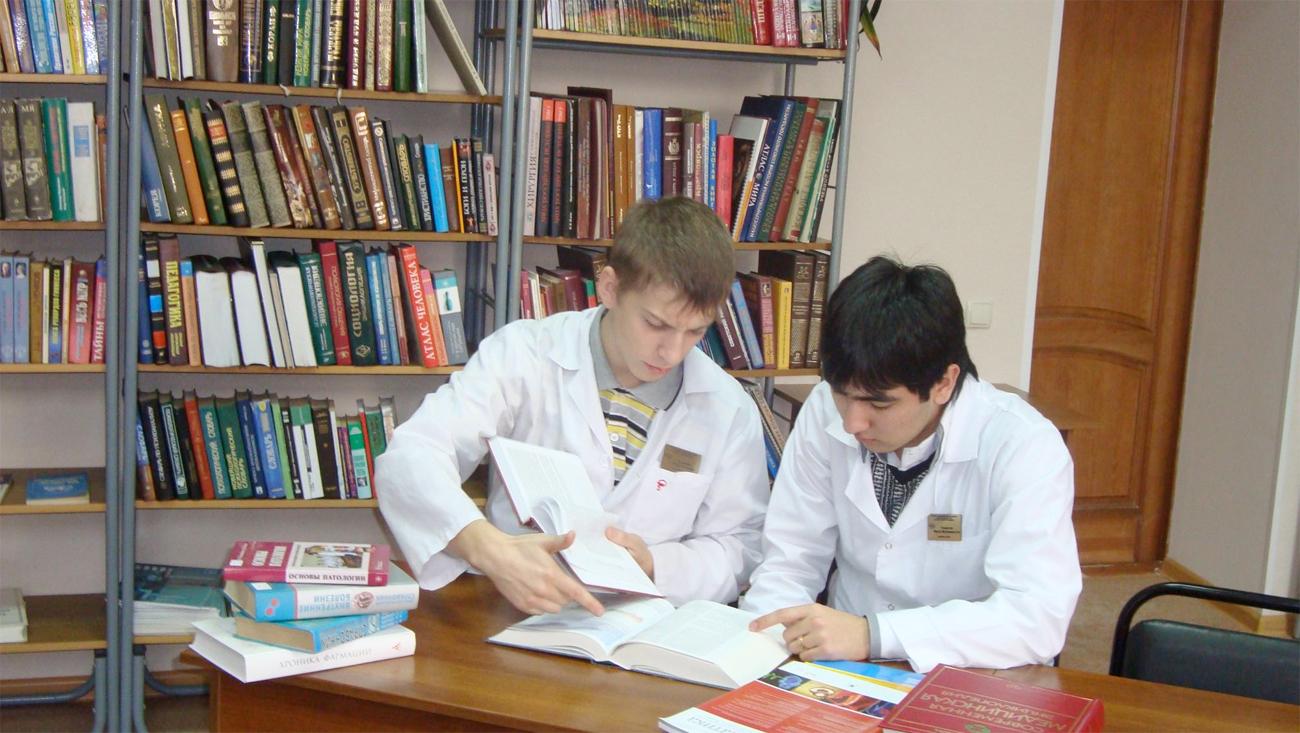 The Library Center originated when in 1942 medical schools from the sieged Leningrad and Voronezh Stomatological Institute were evacuated to Krasnoyarsk. Lecturers, research fellows and students brought along books from their libraries. Those were the books that formed the foundation for the Library stock.

Later on there were augmenters from local doctors’ personal libraries. The Krasnoyarsk Regional Archives donated the works of Society of Doctors of the Yenisei Province, among them there were scientific papers of Vladimir Mikhailovich Krutovsky, the founder of medical education in Siberia and organizer of medical assistance for the population of the Province.

Initially the Library was located at 125 Uritskogo Street. Its head was Maria Nikanorovna Sokolova. There were five people on the staff. In 1952 the Library moved to more spacious premises at 124 K. Marx Street, and in 1963 it was relocated to the new building in Partizana Zheleznyaka Street where it is situated up to now.

In 1968, Tamara Ivanovna Galevskaya was appointed Head of the Library, in 1975 Maya Grigorievna Novgorodova occupied this position, and in 1991 – Raisa Fyodorovna Malkova.

In 1970-1980, the Library became a multi-functional sub-division of the medical school. The Library stock was growing intensively, the structure was improving and new departments were formed.

There appeared a stock of foreign literature which is a pride of the Library. It contains some rare editions dating back to XVII-XIX centuries, such as: The History of Anatomy and Surgery by Portal (Paris, 1770), A Treatise on Surgical Diseases, and the Operations Suited to Them by Boyer (Paris, 1814). Many foreign editions were received from the USA and Great Britain as repatriation to compensate for the damage caused to the country during the Second World War.

Latest years of the XX century witnessed a wide spread-out of the Internet global network and a fast development of new technologies designed to process and transfer information. These trends led to significant changes in the work of educational institutions which in their turn transformed the work of university libraries.

Under the new circumstances, the Library has become a social institution whose mission is to provide all categories of readers with a fast access to the necessary information.

From 1995 to 2011, Head of the Library was Lyudmila Anatolievna Myagkova. During that period, the Library was actively engaged in the work aimed at information technologies implementation into the library processes. ‘Liber’ automated library system was purchased (later on it was updated to ‘Absotheque Unicode’ new version). Since 1999, there has started an intensive usage of e-LIBRARY scientific electronic library, Stanford University library as well as EBSCO data-base.

In 2012, the Library Center took active part in development and implementation of ‘Colibris’ electronic library system, and received the Certificate of ‘Roscomnadzor’ (Russian supervision authority for information technologies and mass communications) of registration of ‘Colibris’ electronic library system’ mass media item. The Library Center also participated in the development of electronic training-methodological complex of disciplines.

In 2012-2018, the Center staff applied for different grant projects and programs. In particular, they took part in ‘Access Point’ project that in 2012 received support from the Mikhail Prokhorov Fund. The project was designed to provide visually impaired students of Pharmaceutical College with a free access to the University electronic library using computer typhlotechnologies. The year 2015 also witnessed a successful realization of ‘Professional Mobility’ travel grant, the Mikhail Prokhorov Fund supported it as well. More than once the Library Center received access to full-text international data bases arranged by the State Public Scientific Technical Library of Russia. Since 2013, fruitful work within ‘Science Index in an Organization’ project has been carried out.

In 2015, Head of the Library Center I.A. Sheremetova became a member of the work group whose task was to devise and launch a website for Siberian Medical Review journal. Thanks to our joint work the website of the journal is in great demand with the scientific community.

In 2016, the University Library Center won the third place in the independent Rating of medical libraries among 56 universities in Russia held by ‘Academy of Evidence-Based Medicine’ public organization.

As at the date of 01st July 2019, the Library Center accounts for 495,000 books, more than a thousand users call in daily, about 2,300 documents on different bearers are given. ‘Colibris’ electronic library system contains the electronic catalogue with more than 99,000 entries. In the stock of the electronic library system there are editions dating back to earlier years in Russian and in foreign languages, modern textbooks, educational and methodological publications, scientific materials produced by the University lecturers, theses, abstracts and synopses of theses. The Library Center provides an opportunity to use unique publications, among them a collection of works of Society of Doctors of the Yenisei Province and a book collection in English and in Japanese donated by the Japanese government.

The period of 2015-2019 was marked by organizing and holding numerous discussions and round tables for users dedicated to various memorable historical events, meetings, scientific reunions and informal talks given by honored University professors, presentations of new books, readers’ contests.

At the beginning of each academic year, the Library Center familiarizes first-year students with the facilities and shows them how to use electronic resources. To improve the quality of publication activity, there are held training seminars for lecturers, heads of scientific-educational centers, research laboratories, University graduates on work with international data bases.

The Library Center specialists carry out work on proof-reading, editing and making the layout of publications to be released by the University, among them are textbooks and teaching materials, scientific works of the lecturers.

In 2018, the Library Center was actively engaged in preparing analytical reports regarding scientific activity in the University.

Research activity is one of the areas the Library Center pursues, it allows to determine the priorities of our further development. Modern users come to the library not only to get access to the information but also to jointly produce knowledge. Modernization and modification of the library space is one of the current tasks of great importance. Thus, in 2018, the Library Center conducted a marketing survey to study the University students’ opinion on the topic ‘Library space: a modern student’s new view’.

In spite of the Internet rapid development, the University LIBRARY with its full array of information resources (both digital and printed) does not lose its popularity among the students, the modern e-culture being felicitously combined with the traditional book culture.

The University Library Information Center staff is not complacent about the achieved results and acts as a full-fledged participant in the formation of the University educational and scientific environment.